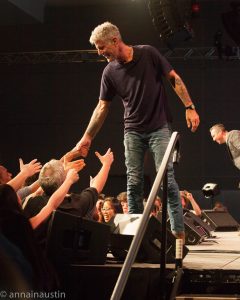 How many people have stared at the TV screen and wished, seriously, fleetingly or just fancifully, that they had Anthony Bourdain’s life?

I know I have.

That makes his suicide today even more shocking. All of us who have wondered what it would be like to step into his shoes now realize we really have had no clue, none, what that means.

I was going to write here, now, that the man clearly had demons. But that’s just glib and easy. And one of Bourdain’ qualities was that, in his writing, he resisted the go-to cliché. He was by his own admission not a top chef, but he was, by any measure, a top writer. And “demons” is the easiest way to dismiss a disease or condition that we really need to understand and treat better.

In his controversial visit to Israel, where I lived for two years and visited many times, he introduced me to Majda, a small restaurant on the outskirts of Jerusalem run by an Palestinian Muslim husband and his Israeli Jewish wife. I thought the episode, which many Jews criticized, was the perfect one-hour introduction to the complexity, and beauty, of Israel.

“One can be forgiven for thinking,” he said towards the end of that show, “when you see how similar they are, the two people, both of whom cook with pride, eat with passion, love their kids, love the land in which they live or the land they dream of returning to … that they might someday, somehow figure out how to live with each other. But that would be very mushy thinking indeed. Those things in the end probably don’t count for much at all.”

I watched his post-election Season 9 opener on Los Angeles a couple of times. It came at food in LA through the eyes of the poor and lower middle class people who struggle to make it here. It was a direct response to the anti-Mexican, anti-immigrant stench rising off the White House. It also exposed me to dishes in my hometown I’d never tried.

That two-fer is what made Bourdain special. It wasn’t just about food. He didn’t do just travelogue. He was trying to do something different, especially in “Parts Unknown.” Sometimes it worked, as in the LA episode, and sometimes, when he’d be chatting with some Poli Sci professor about Brexit, I’d think, No, just go find a kitchen.

But in the glut of food media out there, there is very in little that truly surprises with its subject or insights, and Bourdain always surprised me. He was a food writer the way Howard Stern is a DJ.  Both used a platform that had been burdened with mediocrity and middle-brow talent and used it to tell the world their truth.  Bourdain was talking about himself when he wrote of the food critic Regina Schrambling, “She rarely if ever commits the first and most common sin of food writing— being boring.”

That quote is from his book Medium Raw: A Bloody Valentine to the World of Food and the People Who Cook. If you only know Bourdain through TV, now would be a good time to read that book.   It is, eerily, forward-looking. He muses about where food and restaurants are heading. He writes at length on what he hopes and wishes and plans for his daughter. (I just tried to get through a few sentences of that section. Not easy.) And he has an essay I’ve read and quoted from many times about the importance of teaching cooking to the next generation:

In a shiny, happy, perfect world of the future, what should every man, woman, and teenager know how to do? They should know how to chop an onion. Basic knife skills should be a must. Without that, we are nothing, castaways with a can— but no can-opener. Useless. Everything begins with some baseline ability with a sharp-bladed object, enough familiarity with such a thing to get the job done without injury. So, basic knife handling, sharpening, and maintenance, along with rudimentary but effective dicing, mincing, and slicing. Nothing too serious. Just enough facility with a knife to be on a par with any Sicilian grandmother.

Everyone should be able to make an omelet. Egg cookery is as good a beginning as any, as it’s the first meal of the day, and because the process of learning to make an omelet is, I believe, not just a technique but a builder of character. One learns, necessarily, to be gentle when acquiring omelet skills: a certain measure of sensitivity is needed to discern what’s going on in your pan— and what to do about it. I have long believed that it is only right and appropriate that before one sleeps with someone, one should be able— if called upon to do so— to make them a proper omelet in the morning. Surely that kind of civility and selflessness would be both good manners and good for the world. Perhaps omelet skills should be learned at the same time you learn to fuck. Perhaps there should be an unspoken agreement that in the event of loss of virginity, the more experienced of the partners should, afterward, make the other an omelet— passing along the skill at an important and presumably memorable moment.

Not boring, even though he had been at it a long time. And I’m very sorry there won’t be more of it.

There was a point in many episodes when he did repeat a single phrase.   He’d be slurping noodles or eating BBQ or attacking a mound of shellfish, and he’d declare that he was in his “happy place.” Every time he said it, I felt it. I’d think, Hey, mine too.   I’m sure a lot of people thought the same. Whatever else he was struggling with, Bourdain knew how to find the ways that food brought him comfort and joy.   And his great talent was in sharing his joy in a way that we could all feel it. And that only makes the pain worse.

« My Fireplace Egg-Spoon Fantasy
Wait? Centanni in Venice Is Closing? What? Why? »