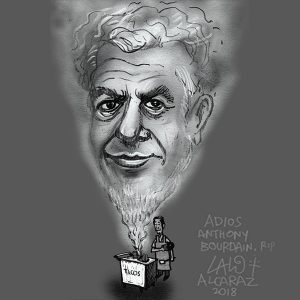 These are my favorite Anthony Bourdain farewells.  I’ve ordered them by personal preference, your results may vary.  They are  moving, life-affirming and crushingly sad.

Clearly the man inspired people he knew, and millions more he never met.  I wonder if he knew that.

“I can read a fucking book. Same as the rest of you fucks.”

“Bourdain ended the episode on a brutal note…a reminder of America’s racist dehumanization of the culture we at home had just spent an hour celebrating.”

“…his resonant drumbeat of people are good and the world is vast was life-altering for me.”

On Anthony Bourdain and Living Unflinchingly  by Julia Claire

“The shoot wrapped up at midnight. Los Angeles would not let him leave.”

“The meager edited footage turned the episode into a difficult-to-watch existential meditation on how awful the world can be even while people remain capable of bridge-building.”

He may have had a bad boy persona, but Anthony Bourdain was lovely, loyal and so damn smart  by Evan Kleiman

“In these current circumstances, one must pick a side,” Mr. Bourdain wrote. “I stand unhesitatingly and unwaveringly with the women.”

“We must do more and be better. Anthony, our friend, would want it that way.”

“Watching it now, I think Bourdain connected to everyone at the heart level all the time.”

Anthony Bourdain Was the Best White Man by Mallika Rao

“The best tribute, today and going forward, is to take the curiosity that Bourdain strode the world with and apply it wherever you live.”

The Best Way to Honor Anthony Bourdain’s Memory: Eat Like He Did by Annaliese Griffin

If you like food and you like Israel, this past week’s episode of Anthony Bourdain’s “Parts Unknown” was a win-win.

And I say that despite the criticism Bourdain has received from the people who profess to love Israel. To them, he presented a biased, pro-Palestinian screed disguised as a food show.

To me, he showed exactly how smart, curious people should engage a complex country — and how Israelis and Palestinians benefit from that approach.

To food lovers, Bourdain is a star. He wrote the best-selling memoir of life as a professional chef, “Kitchen Confidential,” then took his biting insights on the road, first in the Travel Channel series “No Reservations,” and now for CNN. He travels the world reporting his perceptions of people and their predicaments, always using food as the way into their lives.

His first experience with Israel wasn’t pleasant: Bourdain was filming in Beirut in 2006 when the Second Lebanon War broke out, and he found himself at the wrong end of Israeli rockets.

I wondered in a column if that experience cooled Bourdain to the idea of visiting Israel, despite the fact that the country has undergone a food revolution. I even started a Facebook page to get fans to urge him to go there and see for himself.

Three years, a dozen destinations, one network and an entire show concept later, Bourdain arrived in Jerusalem. My efforts, clearly, were wildly persuasive.

But it was worth the wait. Bourdain reports like he eats — hungry for it all. And within the confines of a popular, half-hour travelogue, he devours the Holy Land with an open mind and an open mouth.

He starts at the Western Wall with the surprising acknowledgement that he is half-Jewish, despite a non-religious upbringing. At the Western Wall, the man who describes himself as “hostile to any sort of devotion” very publicly wrestles with his feelings as an Orthodox Jew wraps him with tefillin, and he prays, as a Jew, for the first time in his life.

Leaving Jerusalem, Bourdain shuttles between Israelis and Palestinians, collecting contrasting narratives and the meals that go with them.

He eats at the table of winemaker Amichai Luria, in the West Bank settlement of Eli, and peppers settlement leader Amiad Cohen with questions about their Palestinian neighbors.

When he asks why the settlers don’t paint over anti-Arab graffiti sprayed by Jewish vandals, Cohen is momentarily at a loss for words, like maybe he was just expecting Rachael Ray.

Just outside of Jerusalem, in the village of Ein Rafa, Bourdain eats at Majda, an idyllic  restaurant run by husband-and-wife team Michal Baranes, an Israeli Jew, and Yakub Barhum, a Palestinian Muslim. They serve Bourdain fried zucchini in goat yogurt and okra with roasted tomato, onion and mint, and Bourdain allows himself to fantasize, for a second, that a divided land could actually come together over food.

Then, reality: In Gaza, he eats a local delicacy of charred young watermelon with soggy bread — he does a terrible job of feigning delight — and hears the bitterness of old men displaced from their homes in 1948.

Just on the other side of the Gaza border, Bourdain visits Natan Galkowicz, owner of Mides Brazilian Restaurant in the Negev kibbutz Bror Hayil. Galkowicz’s daughter was killed in 2005 by a Hamas mortar.

Look, it’s not a 13-hour PBS documentary. But this is the way most people come to understand Israel: not through PR, or via professors, but through what’s popular — what’s on television.

That didn’t stop the pro-Israel watchdog group CAMERA from nitpicking it apart. “Bourdain felt compelled to play to the perceived political orientation and pro-Palestinian sympathies of his audience,” the organization posted on its Web site, citing exactly zero statistics to support its own assumptions about his audience.

But given the limitations of the medium, Bourdain did the right thing. He gathered narratives, tested them against one another and against his own sense of what’s right and wrong. He sat down at tables and let people tell their stories. And only after he had listened, and eaten, with all of them — Israeli and Palestinian — did he venture a conclusion:

“One can be forgiven for thinking,” he says, “when you see how similar they are, the two people, both of whom cook with pride, eat with passion, love their kids, love the land in which they live or the land they dream of returning to … that they might someday, somehow figure out how to live with each other. But that would be very mushy thinking indeed. Those things in the end probably don’t count for much at all.”

If only the high priests of certainty on all sides would be as willing as Bourdain to sit and hear competing narratives. They might learn something — and get a good meal, too.

Rob Eshman is publisher and editor-in-chief of TRIBE Media Corp./Jewish Journal. E-mail him at robe@jewishjournal.com. You can follow him on Twitter @foodaism.