Yom Kippur, the holiest day of the Jewish year, takes place this year from the evening of October 8 to the evening of October 9. Yom Kippur is the Day of Atonement, a holiday set aside for prayer and introspection. The laws governing the holiday require Jews to refrain from any kind of work and to afflict their bodies by abstaining from food, water, bathing and sex. The idea is one common to all religions: that by suppressing our physical needs, we will refocus on our spirit. 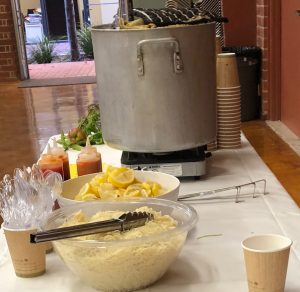 The giant harira pot on the Nashuva break fast buffet.

Two thousand years ago they called it fasting. Now it’s called cleansing. But the amazing thing is this: it works. By the time the holiday ends, as all Jewish holidays do, at sundown, I feel that something inside me has shifted. Hunger, when it’s a choice, can be empowering, reminding us that we are not captive to any need, impulse or thought.

But, then comes the break fast. This is the festive meal that marks the end of the holiday, and in the Ashkenazi Jewish tradition, it can be punitive. The light, healthy being inside you suddenly confronts a groaning board of salty lox, gummed-up cream cheese, oily whitefish, the egg- and sugar-packed baked noodle pudding called kugel, and of course bagels, piles and piles of bagels. Bagels stacked up like barbell weights, bagels that will set anchor in your stomach until the next High Holy Day.

Ashkenazi Jews settled in Central Eastern Europe around the end of the first millennium. Their foods are the foods of their neighbors: bagels, lox, cream cheese, noodle pudding, or kugel, pastrami, corned beef, borscht. When you think deli, think Ashkenazi.

Sephardic Jews took a different route, settling in Spain—the Hebrew word is Sepharad—then fanning out to Portugal, North Africa and the Levant. The foods they adopted or adapted include hummus, couscous, harissa and tagines.

Sephardic cuisine reflects the Mediterranean diet. Meanwhile, no one has written The Ashkenazi Diet. I suppose it’s possible to slim down on nothing but gefilte fish and cheese blintzes, you’d just have to schedule in four hours of Pilates, twice each day.

My people are Ashkenazim, Jews of Eastern European origin. At the turn of the century, my great-grandfather Aaron Eshman went into business with his father-in-law, Louis Peshkin. Eshman and Peshkin opened a kosher restaurant in Chicago, New York Deli, which brought Ashkenazi food to Clark Street. It was called Eshman and Peshkin. It failed.

But I grew up eating on holidays what their menu offered: chicken soup and matzo balls, brisket, kishke and rugalach my maternal grandmother Bertha, and my mother Sari, cooked. It was delicious, and I loved it. But then, in the early 1980’s, I first visited Israel, and discovered the other Jews.

And I liked their food better.

At the end of one Yom Kippur, I was invited to the home of a Moroccan family in Musrara, a neighborhood on the seam between Arab East and Jewish West Jerusalem. The father greeted me at the door with a double kiss, then handed me a shot glass of clear liquid. He motioned for me to toss it down my throat. It was boukha, an eau-de-vie made from figs, and it burned out whatever detritus of the past year was left in my intestinal tract.

Then came harira. This is the traditional dish Sephardic Jews, especially those from North Africa, eat at the end of the fast. It is stew-like, with onions, tomato, rice, lentils, cumin and chile, then finished with lemon juice, parsley and dill.   The toasted spices and herbs worked like smelling salts, brought me back to the material world. The lentils quickly filled me up without weighing me down. The touch of hot chile pepper rekindled my appetite. Kugel was dead to me.

Years later, I found the recipe. Meme Suissa, the mother of my then-colleague David Suissa, learned to make harira from her grandmother and mother in Casablanca. I spent a day at David’s house while Meme walked me through the steps. The recipe came with reminiscences about how the soup was something the Jews and Muslims shared—the Muslims made it for Ramadan, the Jews for Yom Kippur, and they would often trade recipes and tastes.  The idea that a soup could be the bridge between Jews, Muslims and their most sacred holiday makes it tat much more special.

Last year, I decided to make it for my community. My wife, Rabbi Naomi Levy, leads High Holiday services for the congregation she founded, Nashuva. I suggested instead of offering the standard Ashkenazi fare, we go Sephardic.

Naomi announced it to her congregation of 1200 souls. I was on.

I combined Meme’s recipe with inspirations from other cooks, including David Tanis’s recipe and another from TasteofMaroc.com. To cook for a village, it takes a village.

I bought a 15-gallon soup pot from Smart and Final, two feet tall by 1 1/2 feet in diameter. Our friend Julie came over, along with my mother, and we chopped and sautéed 30 onions, added 120 cups of diced tomato, 30 cinnamon sticks, 20 cups of lentils, 120 garlic cloves—you get the idea. I figured just 300 people would stay for the break fast, but that was 300 people who hadn’t eaten in 25 hours.

Julie Drucker and me in the harira kitchen

The holiday ends with the blast of the shofar, the ram’s horn. For me that was a sign: put out the soup. With a small army of volunteers, we stationed the enormous pot alongside bowls of garnishes: lemon wedges, extra virgin olive oil, and fresh chopped parsley. On the other tables, we laid out the cream cheese, white fish and bagels. Because you can only mess with tradition so much.

The congregation spilled into the social hall and in a blink, the food was gone. We received hundreds of compliments on the soup. It was delicious. Also, people were really hungry.

In the midst of the feeding frenzy, an older woman came up to me and said the soup reminded her of celebrating the holiday in her Moroccan grandmother’s home in Paris. There were tears in her eyes.

That, for me, was a spiritual high.

The Nashuva congregation at break fast.

Harira for a Crowd

This recipe serves 20. It can easily be divided or multiplied. (For Nashuva, I multiplied it times fifteen). This version is vegan, though you could replace the water with chicken stock, or even add shreds of cooked chicken, as Meme Suissa does.

“Don’t waste a thing!” Meme Suissa declared, in French, as she swept up two errant leaves of flat leaf parsley and tossed them into the pot.

Meme, who is in her eighties, was teaching me to cook cervelle a la maroccaine, or brains, Moroccan-style, in the kitchen of her son David.

It’s a dish she learned to make from a dear neighbor back in Casablanca, where the family lived before moving first to Canada.

And cervelle is very much in keeping with Meme’s lifelong dictum against waste.  In Casablanca, she learned to use every part of the animal– so long as it was kosher.  Brains, cheeks, tail — her neighbor taught her recipes that coaxed wonderful flavors from these underused, and less expensive parts. Now “nose-to-tail” cooking is all the rage.  For Meme, it was a matter of survival, or at least economics.

Weeks ago, Meme, David and I got to talking about all these non-standard cuts and the wonderful meals she made from them. She lamented that her local kosher butcher doesn’t even carry tails, cheek, tripe and brains.  On the spot, I texted my local kosher butcher, Israel Feuerstein at Rabbi’s Daughter on Westwood Blvd.  He texted back: yes, give him a week.

When I arrived at the shop, Israel told me he could get tails, cheek and brains, but no tripe.

“It’s from the rear of the animal,” he said, pointing out that observant Ashkenazi Jews are forbidden from eating from the hindquarters of animals.

“Well what about the tail?” I asked.

Israel shrugged: Hey, I don’t make the rules.  I understood.  If it was logic I wanted, I wouldn’t be in a kosher butcher store in the first place.

A week later I showed up at David’s with two pounds of beef brain. Since I was coming from the Jewish Journal offices, I had to store it for the day in the staff refrigerator.  All day long I waited for a scream to come echoing out of the kitchen, but the brain went undiscovered.

Later, as David and I recorded, Meme set about cooking a dish that brought her back to Casablanca, to Montreal. Her hands deftly removed the bloody membrane circling the fleshy coils.  After a quick soak in salted water to remove more blood, she boiled the lobes in more salted water for about 10 minutes.

“I want to give you some soup,” Meme said.  She walked to the refrigerator and pulled out a white bean soup she had made the day before.  It was also a dish from Casablanca, similar to the harira she had taught me to make.  She heated it and served me a bowl beside a homemade whole wheat roll.  I sopped up every bit.

OK, so much for the comfort food, back to the discomfort food.  Meme drained the brains and cut them into bite-sized pieces.  Then she sauteed them with just a few ingredients, including saffron, lemon,garlic and that parsley.

At some point, cooked meat can cease looking anything like an animal part.  But brain never stops looking like brain.  I decided you either had to cook it superbly, or be very, very hungry.

Not 20 minutes after I arrived the brain was finished.  Meme plated some for me, steaming chunks of pale organ bathed in a thin saffron yellow sauce. The scent was heavenly: all that garlic and lemon and parsley.  The flavor?  Every bite reminded me I was not eating just meat.  It was soft, like scrambled eggs, but where the oil and seasonings didn’t penetrate, there was the funk of organ meat, something musty and, well, challenging.

But I ate it all, focusing on the Meme parts — the garlic, olive oil, salt, lemon, saffron, parsley– not the brain parts.  No, I didn’t waste a bit.

Meme Suissa doesn’t measure, and doesn’t appreciate your interest in measurements. Everything below is approximated. By me.

1. Soak cleaned brains in salted water for 10 minutes. Drain and rinse.
2. Bring a large pot of salted water to boil.  Add brains, cover, and reduce heat to a simmer.  Cook 10 minutes, or until brains are firm.

3. Drain brains in a colander.  Let cool until you can cut them into 2 inch pieces.
4. Heat oil in skillet.  Add garlic.  Fry until just translucent. Add brains. Stir gently to coat.  Add saffron water, lemon juice, half the parsley, and salt and pepper to taste. Stir.   Bring to simmer, cover, and cook 10 minutes.
5. Sprinkle with remaining parsley and serve.