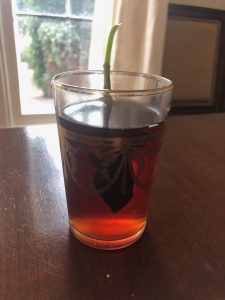 I first learned to make sage tea from a Jew who called himself Palestinian.

Mr. Yadeni was born in pre-state Palestine in the early 1900s. By the time I met him, he was old. He had made some money creating Israel’s first lock company in 1947, the still-going Yardeni Locks, and he lived on plot of land in Ein Kerem, in the hills of Jerusalem. He was in love with the land. As a boy he had hiked every inch of it, and in his retirement he spent hours tending to his garden and foraging. I think for him the land came before politics. It was there before the first Arab or Jew ever set foot on it, or bled on to it, and it will, God willing, be there long after we are all long gone. Yardeni showed me how to make wine from the pomegranates, zaatar spice from the wild oregano, and tea from the mint and sage.  Mint, he explained, was for summer and spring, sage for fall and winter. To this day, in LA, that’s what I do.

Not surprisingly, as I started cooking fro Palestinian cookbooks, I came across sage tea.  A recipe for int tea appears in Joudie Kalla’s Palestine on a Plate, and in The Palestinian Table, Reem Kassis features a recipe for sage tea . 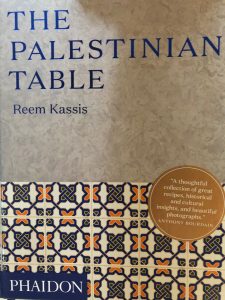 The key to making it is to use black tea (caffeinated or decaf) and plenty of sugar. You steep it all together a few minutes, and enjoy. Yardeni used wild sage that he picked himself. I use the stuff from my garden or, you know, the supermarket.

Even the supermarket stuff evokes for me the flavor of the Jerusalem or Galilee hills. I can’t pour myself a cup without thinking of Yardeni, sipping from his glass between puffs of his pipe (he smoked an old Shalom briar, another pre-state product). I had many glasses of sage tea with Yardeni, and even more when I’d sit the cafes of East Jerusalem in winter. On the street leading into the Old City from Damascus Gate, Palestinian women in heavy embroidered black dresses still sit beside piles of sage, selling it for just that purpose.

The Israelis and Palestinians I love most are like Yardeni,  the ones who love and appreciate the land they live on. The more distance I get from covering the day to day craziness of Israeli politics and the Israeli-Palestinian conflict, and the more I focus just on the land and the foods, the simpler the solution seems to me: Just share it.

Its easy to get caught up in the weeds of the conflict. Try focusing on the herbs. 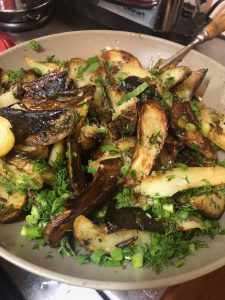 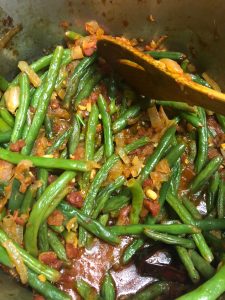 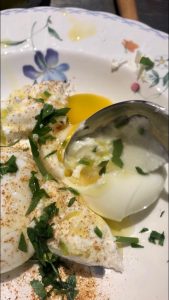 I started cooking from Joudie Kalla’s Baladi cookbook by making a more complicated dish—meat stuffed grape leaves with tomatoes and potatoes—then I moved on to a simpler cabbage salad. This dish is even easier than that—eggs with yogurt, chili, olive oil and lemon. Joudie writes that it is her father’s favorite breakfast, and I can see why. The hot, soft boiled eggs melt into the yogurt, and the resulting fondue-like blend gets a jolt from fresh lemon and chili. That’s a lot of flavor before 9 am.

For those of you who’ve been hesitant to try one of these recipes— maybe you think the whole thing is a irredentist Palestinian plot to undermine the Jewish state, or an imperialist Israeli plot to get you to appropriate Palestinian culture, or, you now, maybe you just hate cooking– this is a good dish to try. You can make it in 5 minutes. It captures the flavors of the land, and it really does go well with strong black coffee.

A few recipe notes: You can make this with labne, Greek yogurt or strained regular yogurt.  you can dust with some za’atar. I’ve also made a version adding a small scoop of warm garbanzo beans and a tomato-harissa sauce– a perfect brunch meal.

Next up: dessert. The Times of London just named Baladi as Best Cookbook of 2018. Congratulations/Mazel Tov/Mabrouk to Joudie Kalla—it’s time to celebrate! 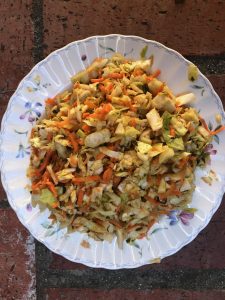 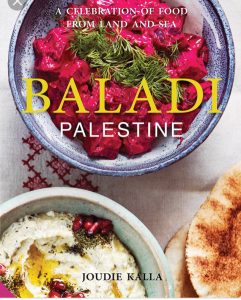 The fragrance—cumin, onion, tomato, grape leaves, parsley—immediately transported me to the land from which it comes—what Palestinians call Palestine and Israelis call Israel. How is it possible, you wonder, to write about that over-promised land and its people and not get lost in anger and argument? How do you celebrate your culture without negating another culture? How do you get people to see you have a culture beyond what they read in the most violent or depressing headlines? Kalla has figured out the answer: write a cookbook.

Baladi, like Kalla’s earlier book, Palestine On a Plate, shows the beauty of the land, the culture, the food and the people. She looks at the land not as a battleground, but as a blessing.

For this dish, instead of lamb, I used a combination of ground turkey and chicken. (You could easily make a vegan version, using chopped sauteed mushrooms instead of meat.) The meat is flavored with onion, parsley and cumin, then wrapped inside grape leaves that you first boil. When it cooks, the potatoes gets crisp and chip-like, the onions and tomatoes melt and form a cumin-scented sauce with the fat  and olive oil. On the side I served a thin tahini sauce. It was delicious, and beyond that it  looked delicious, something most people haven’t seen or knew little about– like, you know, Palestinian culture.

Next up: Cabbage Salad with Cumin and Mint.