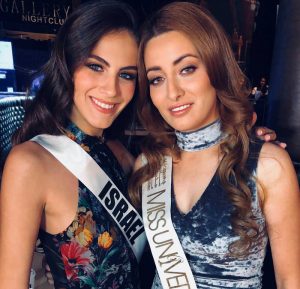 Here’s an urgent question: what will replace the swimsuit competition in the Miss America pageant?

A couple of weeks ago, the pageant organizers announced that contestants would no longer be judged by how well they look in a Band Aid top and Speedo bottoms. The swimsuit and evening gown competitions would be replaced by assessments based on the contestants’ “hopes and aspirations.”

Some people are trying to turn this decision into another front in the (yawn) culture wars. On the right, columnist Dennis Prager kept it measured and nuanced.

“As I have documented repeatedly,” he wrote, “the left ruins just about everything it touches: the universities, the arts, the elementary schools and high schools, religion, sports and ordinary, everyday interactions between human beings — especially human beings of different races. The latest examples — in just the last few weeks — are the Boy Scouts, sculpture and the Miss America pageant.”

To me the key words here are “just about.” There’s that nuance. 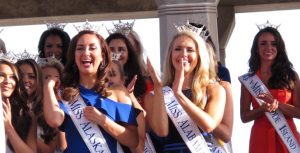 Some people on the Left have defended the decision as a way to help society think of women more as fully rounded human beings and less like breasts who may be able to play guitar.

As for me, I think it’s time to change up a stale format. Anybody who’s watched Little Miss Sunshine knows that beauty in beauty contests is too easy to fake: plastic boobs, hair weaves, and Preparation H to tighten eyelids. (Hemorrhoid cream turns out to be the Swiss Army knife of pageantry. Rima Fakih, Miss USA 2010 told Yahoo that she slathers it all over her body and wraps herself in Saran wrap “just to tighten everything up.”)

I’m going to suggest a category that can’t be fudged: courage.

That’s right. F “hopes and aspirations.” Let the judges decide based on which woman has kicked over the biggest apple cart. Courage, said Maya Angelou, is the greatest of all attributes, because without it, none of the other are possible.

“You can practice any virtue erratically, but nothing consistently without courage,” she said.

After the women make us it through the always-embarrassing adult equivalent of your kid’s viola recital, let’s hear testimony of their toughness.

So, for instance, if the Miss Universe pageant were held today under my new rules, the clear winner, not even close, would be Miss Universe Iraq 2017, Sara Idan.

Okay, it‘s a pretty woman eating okra, how is that news?

I read the caption and accompanying story in the Times of Israel and — wow. Whatever the female, Arabic equivalent of cojones is, this woman has huge ones.

During the 2017 Miss Universe pageant in Las Vegas, she befriended Miss Israel, Adar Gandelsman. The two snapped a selfie, which Sara Idan posted to her Instagram account.

The picture of the two women did not stay in Vegas. For many people this was a heartwarming example of how individual people can bridge religious and political divides. But inside Iraq many saw Idan’s picture as heresy. She was consorting with the devil itself, Israel.

Let’s put aside for a moment that a good number of Muslim and Arab nations have either made peace with Israel (Egypt, Jordan, Azerbaijan), have close if testy relations with Israel (Turkey, Palestine), or turn to Israel behind the scenes for goods, services, intelligence and defense (Saudi Arabia, the Gulf States, etc). Politically and economically Israel may be gaining traction among Muslims. But there is still deep anger, blind hatred, and distrust towards it in much of the Arab and Muslim world.

Why this is, and whether it’s justified or even rational, is a much longer discussion, by which I mean tiresome arguments involving 1948. I mean, 1948 B.C.E.

I want to get back to Miss Iraq, Sara Idan.

All she had to do was shut up and smile.

All she had to do was look good in a dress.

All she had to do, when her countrymen called her a treasonous Zionist whore and threatened to kill her, her mother and her entire family, was delete the Instagram post of her and the Israeli woman and apologize.

Because if she didn’t, there is no question some lunatic would kill her, and her family.  It was back down or die.

Say yes, and continue to be one of the most beloved and famous Iraqis in your whole country.

Or say no, and be hounded into exile or killed.

She told her family members to pack their bags and head to the airport. And they did, and they fled.

Even if the prize for this act of singular bravery was resettlement in the United States, it still meant ripping yourself and your whole family away from home. It still meant some fanatic could, somewhere, somehow, catch up to you. It meant you couldn’t for sure be safe.

But Sara Idan said no.

She said the Instagram of her and Miss Israel wasn’t a statement of support for Israel’s government or policies, just an attempt to show Arabs and Israelis can get along. Idan gave up everything to remind people that peace is possible.

Then, a few days ago, she went even further.

She travelled to Israel to meet her friend Adar Gendelsman again. They look so happy in the photos, like sisters or, you know, cousins. They hung out and snapped this photo of Idan eating bamia, the Arabic word for okra, at a restaurant in Jerusalem’s Mahane Yehuda market. 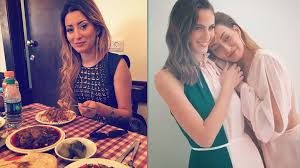 So, judges of Miss America and Miss Universe, go ahead and ditch the swimsuits, the evening gowns and – please, please — the talent show. Use one measure, and one measure only, of what it means to be a beautiful woman: Sara Idan.

To honor Sara, I’m posting a recipe inspired  by Joudie Kalla’s Palestine on a Plate,  my go-to cookbook for Palestinian food.  Kalla’s recipe for Bamya bil Zeit (Okra with Olive Oil) is the real thing. Whatever Sara Idan  was eating in Jerusalem must have tasted something just like it.  If  you want it, buy the book.

1 1/2 pounds okra (circumcise just a bit of the stem end, not enough to expose the seeds)

Mix all okra ingredients in a casserole, add 1- 1/2 cups water or broth and bake in a covered casserole for about an hour. Blend oil and harissa.  Thin yogurt with a little water.  Remove okra from oven and uncover.  Drizzle with yogurt, then with harissa oil, and sprinkle with chopped cilantro or parsley.