Just like the rest of you, I’m still mourning the loss of Jonathan Gold in particular and weekly LA restaurant reviews generally. No one of substance has replaced Jonathan or the now-departed and much-missed critics (Besha Rodell, Katherine Spiers) who stepped into his shoes at the LA Weekly.

So, in the meantime, screw it, I’ll just DIY and post a weekly review here, each Wednesday.

Here’s the first one. But before you read it, here are my caveats and what-have-yous. Jonathan would visit restaurants several times (in at least one case, he said, 17 times) and taste most of menu before writing a review. I can’t do that right now. But I will tell you exactly how many times I ate at a place, and how many dishes I tried.

I will never, ever accept or—God-forbid—request comped or discounted meals. That’s not reviewing, that’s promotion. As for anonymity, I’m pretty sure that won’t be a problem, but if I feel I’m getting special service, I’ll write about that too.

Lastly, who am I to pass judgment?

I’ve been writing about food and cooking, among other topics, for 25 years. Before that, I cooked professionally at Il Fornaio and various restaurant and catering companies in San Francisco, New Hampshire and Los Angeles. I currently teach “Media, Food and Culture” at USC Annenberg School of Journalism. Among the visiting lecturers I had the first year I taught the course in 2015 was Jonathan Gold. If you read a transcript of his talk here, you’ll understand that no one can ever truly replace him.

Jonathan Gold Would Have Liked Hasiba Restaurant, I Think

Los Angeles has a lot of hummus, but Hasiba, which slipped into a narrow Pico-Robertson storefront a few weeks ago, is the city’s first real hummusia.

A hummusia is to garbanzo beans what a taqueria is to tacos. When you want one thing done well by people who make mostly—if not only—that item, you go to a place where the name says it all.

In Israel, there are far more hummusias than bagel bakeries, the first clue to baffled American Jewish visitors that Israeli and American Jews are two peoples separated by a common religion.

Israeli hummusias can be obnoxious places; crowded, loud, where customers bark their orders and the servers bark back. If you don’t show up by early afternoon, the owner will wave you away with a gesture that means either the hummus is finished, or you are.

But what you get is worth the tumult. The best places are owned and run by Arabs. At Abu Hassan in Jaffo, at Arafat or at Lina in the Old City of Jerusalem, they sling the blend of pureed garbanzos and tahini onto cheap plates, rush it to your table, and give you the side-eye if you linger too long. At Abu Hassan, the servers yell, “Yalla! Yalla!” as they deliver and clear. They mean, Hurry up and get out.

The paradox is that the stuff is so good, it’s hard not to want to linger. A hummusia hummus is freshly made. The heat of the just-cooked beans releases the fragrance of the garlic, lemon juice, parsley and olive oil sluiced across the top. Every bite flips flavors and textures.

And that texture: smooth and light, creamy but substantial. It is that texture that will instantly turn you into a hummus snob, that will make most of the store-bought brands feel like cold grainy library paste in your mouth. The secret to the best hummus is not complicated: it has to made fresh.

At Lina’s the owner stands behind a counter near the entrance, his right hand holding a pestle the size of a riot baton, and his left steadying a large, well-used plastic bowl. He adds warm beans, tahini and—okay, here’s another secret—a healthy scoop of cooking water to the bowl, then uses the wooden tool to pound, beat and whip air into the mixture.

I once asked Chef Erez Komorovsky, the Alice Waters of Israel, how these hummusias could possibly turn out so much product by hand.

Does Hasiba have a mixer? A 17th century Ottoman hummus beater? A thick underground pipe that runs from Pico and La Cienega to Jerusalem? Who cares? Because the hummus that comes out of the kitchen is as close as you’ll find at a Middle Eastern hummusia.

The place itself is frill-less. There’s a refrigerator case holding healthy iced teas and bottled kombucha. There’s a long communal table, some outside seating, and the counter where you place your order.

The choices are stripped down too. No kebab—no meat of any kind— just three choices of hummus, a red or green shakshuka, a sabich, the Iraqi fried eggplant sandwich, fries, house-made pickles, roasted cauliflower and Israeli salad. The hummus comes either plain, topped with the traditional semi-hard boiled egg and stewed fava beans, or with a chewy crown of mushrooms.

A single house-made pita bread comes with each order. Buy another, because Hasiba is the newest venture from the people who created Lodge Bread in Culver City, and they gave a lot of thought to the pita. It is both soft and chewy, with a flavor of ancient grains and an air pocket that exhausts a warm sourdough steam.

In Hebrew, Israelis don’t say, “Let’s go eat hummus.” They say, literally, “Let’s go wipe hummus.” At Hasiba, most of the forks stay sheathed in metal canisters. People will rip a piece of pita, drag it around or through the pillowy-soft puree and stuff it directly into their mouths.

If you go with friends, share. Order a hummus and a shakshuka, the now-ubiquitous dish of eggs poached in a stew of onions, garlic and tomato. Hasiba’s has a warm chili heat. The egg yolks can be runny, hard or in-between. If you have a preference, make it clear when you order.

If you want vegetables, there’s Israeli salad, a lemony dice of cucumbers, tomatoes and carrots. And French fries are a vegetable, right? These are cut fresh and fried to a falafel-like crunch and color. They also make excellent hummus wipers. 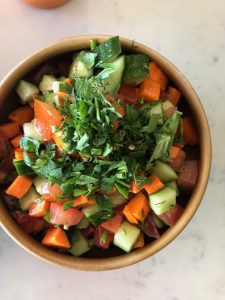 To drink, there is the kombucha, a tank of free, cold cucumber water, or a homemade seasonally-flavored and lightly sweetened slushy—try the melon. I opted for hot, fresh mint tea on each of my visits, because I like it, and there is no beer.

Hasiba is certified kosher. For observant Jews, many of whom live and shop in the neighborhood, that makes it a God-send. A filling lunch or dinner for two won’t cost more than $30. The servers are youthful and friendly. The music is trance or ska. The clientele is a lively blend of Israelis, religious Jews, hipsters on a never-ending walkabout for killer #hummusporn posts, and—as word spreads—the rest of us. Despite the growing crowd, the place is spotless. To be kind, there simply aren’t an abundance of kosher restaurants in Los Angeles of Hasiba’s quality, ambience and value. Tiny little Hasiba may be LA’s best kosher restaurant.

Arguments may rage over that, just as more serious arguments rage over which cultture has the right to claim hummus as its own. Several years ago, a Lebanese government minister actually tried to sue Israel in international court for calling hummus “Israeli.” A few months ago, the Arab-American pollster James Zogby started a Twitter war by accusing Israel of marketing hummus in order to obliterate Palestinian history and culture. Now I can imagine Israeli Jews wondering how it is these interloping American dudes have taken the Israeli hummusia and done it better here than generations of expat Israelis themselves have. Appropriation is not a bug of food culture, it’s a feature.

These arguments are best left to another column, or a discussion over even more hummus (Let me know when you’re next in LA, James, my treat). What’s not up for debate is that in the restaurant world, Middle East is the new Italian. Hasiba comes to us long after Chef Alon Shaya’s ground breaking, Israeli-influenced restaurants in New Orleans, Chef Michael Solomonov’s pioneering American hummusia Dizengoff in Philadelphia, the bustling Chelsea Market outpost of Tel Aviv’s Miznon, and, of course, the opening of Chef Ori Menashe’s Bavel in downtown Los Angeles.

Bavel was the subject of Jonathan Gold’s very last published review. Like all of Jonathan’s reviews, it displayed a mixture of profound experience, research, cooking expertise, a wider civic and cultural sensibility, and superhero-level powers of observation. Just read how Jonathan described the hummus at Bavel:

“Menashe’s hummus is magnificent,” wrote Jonathan, “a ring of silky, airy purée surrounding a big spoonful of chunkier, denser stuff; a green rivulet of olive oil; smears of spicy, smoky harissa and green puréed herbs. The pita has inflated into a sphere on the hot fire, but its interior has the lovely, evolved gluten network of a slow-risen country loaf. And as you scrape the bread between one density and the other, through the oil or not, the dish becomes an essay in the nuances of texture and fragrance, a nifty, chefly trick.”

That’s hummus, and that’s writing. I didn’t know Jonathan Gold all that well, but I think he would have liked Hasiba, too.

Reviewer’s Note: I ate at Hasiba four times over the past two months and tasted every menu item but the roasted cauliflower.

« How to Write About Food: In the Classroom with Jonathan Gold
When Ktown Goes West: Makani Restaurant in Venice »