Centanni is the kind of restaurant that Jonathan Gold would never review. Not because Jonathan wouldn’t like it – I think he would—or because he would consider it beneath him—he’s not that kind of guy. But just because in a city full of the new, the experimental, the deeply authentic and the exotic, Centanni doesn’t stand out. It’s a comfy, mid-priced neighborhood trattoria on Lincoln Blvd. in Venice that is always dependable and occasionally very good. There is wine and beer, and servers with familiar faces. 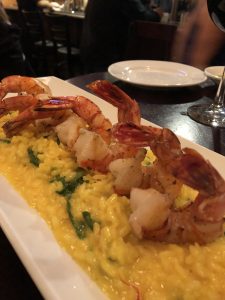 Saffron Risotto with Grilled Shrimp and Arugula at Centanni

You—I mean, literally, you— could recite the menu without seeing it: pasta arrabiata, gnocchi with tomato sauce, spaghetti Bolognese, linguini pesto,  gelato, and so on. There’s a chalkboard with daily specials, and house wine is ten bucks a glass.

The husband and wife owners work the floor, and their chef/partner is in the kitchen. Visit twice and they will remember you. Visit a few times each year, as we have, and it will feel a little like home.

Last night, Naomi was out of town, so I went to Centanni alone  for dinner. Outside on the sidewalk, there was a hand-made sign:

The sign, I have to say, bummed me out.   The place was never at a loss for customers. The owners had opened a second restaurant in Burbank. The food, if anything, had gotten better over the years.

“It’s the landlord,” my server explained to me.

The building had sold, and the new owner more than doubled the rent.

“He wants to turn Lincoln Blvd. into Abbot Kinney.”

Twenty-two years ago, when we moved into our home, our stretch of Lincoln Blvd was the Westside’s premier location for cheap used cars by day, crack, prostitutes and drive-by shootings by night.

But as the Venice real estate market boomed, surpassing even Bel Air and Beverly Hills in its square foot cost, Lincoln became low-hanging fruit. With the same promotional flair that in the early 1900s led a cigarette magnate named Abbot Kinney to call some foul-smelling marshland “Venice of the Pacific,” developers and land-owners started calling four lanes of traffic bordered by shuttered storefronts and shady auto repair shops, “The Linc.”

International brands and deep-pocketed chains took over the street named after Abbot Kinney. The hold-out of the old-school funky hang outs, Abbot’s Habit, closed last year. Rumors are that the neighborhood’s last locally-owned coffee shop will be replaced by a Med Men marijuana outlet.   On a street where the cost of square footage has soared, it makes sense that the price-per-ounce to alter your mind just went from a few cents to a couple hundred dollars.

The whole thing may come crashing down, but in the meantime, owners would rather jack rents, leave their spaces empty and write the losses off their taxes than keep lower-paying tenants on board. That same dynamic is playing out on Lincoln, except places aren’t staying empty long.

For years there was an appliance repair shop at Superba and Lincoln. Inside there was no room to sit. Old vacuums, blenders, typewriters, radios, TVs crowded the shelves, took up every bit of floor space. The only decoration was the cover of a John Coltrane album mounted on the wall behind the counter. The owner, a 40-ish man with curly dark hair, a cigarette habit and a long stare, quoted ridiculous prices to fix toasters that could be replaced new for less.   He listened to jazz non-stop. On sunny days he moved a chair out to the sidewalk and sat a few feet from traffic.

That store is now Christy Dawn, a spare high end dress boutique staffed by what seems to be a rotating staff of models.  The new owner kept the retro “Marina Vacuum Appliance” sign.  Because they always keep the retro signs.

They always keep the retro signs.

The auto repair place next door became Superba Bakery and Café. Superba is very good—Jonathan Gold did review it—but the neighbors agree it is too expensive to just be the local hang. One time I ate an avocado toast with house-pickled radish and very expensive, slightly acidic coffee beside Christophe Waltz. The next time I visited, guess who I saw? Christophe Waltz.

Nearby here’s what has opened in the past couple of years: a boutique selling very expensive pillows. Several bespoke clothing and accessory shops. A gift shop with a vast selection of $40 candles. Platinum Pilates. Bruno’s Pet Boutique. Mystic Journey, a store that sells healing crystals the size of small boulders, for hundreds of dollars each. A psychic whose office looks as nice as a Upper East Side shrink’s. A nutrition shop for weightlifters. And One Taste, a clinic that offers women lessons in achieving a 15 minute-long orgasm.

I’m not disdainful or complaining. I don’t miss the crack dealers or the prostitutes. Platinum Pilates has transformed my mood, my body, and my general health – that’s a whole other post. We go to Superba Bakery more than we ever went to the auto repair. And it doesn’t get old telling people who visit us for the first time that they should head south on Lincoln and take a left just past the orgasm clinic.

Centanni moved in nine years ago. It was charming, with walls the color of Tuscan earth and dark wood tables and chairs. A TV screen alternated subtitled, soundless black-and-white Italian Neorealist movies with posters of great Italian movies and inspiring quotes.   I don’t remember what lower-rent place it replaced, but course it was part of the process that eventually led to its own demise. 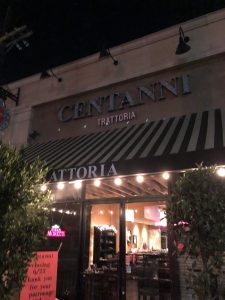 Last night, I ordered a glass of house red and the special, Saffron Risotto with Grilled Shrimp ($23).   Chef and partner Mario Santos trained in Italy, then was executive chef at Dolce and at Valentino’s. Helen Wassell-Paez, then an aspiring actress, worked the front of the house at Dolce with her husband Alex Paez, also an aspiring actor. When the two decided to ditch auditions for the little trattoria of their dreams, they approached Santos with the chance to be not just a chef, but an owner.

What I’m saying is, my saffron risotto, studded with eight large perfectly grilled crustaceans and laced with bitter strands of melted arugula, was superb.  Each bite of rice released a squirt of buttery, saffron-flavored broth. The arugula cut the richness. The shrimp added brine and char.   It made me very happy, which, maybe because of the wine, also made me even more melancholy.

Anthony Bourdain, I thought. Centanni. What the fuck?

Alex Paez had been hugging guests and posing with them for selfies all night. He is actor handsome, with a rich, lovely voice.   I thanked him for his restaurant, and said I’d miss the place.

His eyes were watery—I noticed they’d been that way all night.

Paez said he tried to work something out with the new landlord, but there was no way around the fact that prices on the Linc were skyrocketing, and Centanni couldn’t keep up.

“He already has a tenant,” Paez said. “A high-end vegan restaurant.”

It didn’t come as a shock that, a few Google searches and phone calls later, I found out that—surprise! – the same people who turned Abbot Kinney into the $100 flip flop version of Rodeo Drive are now zeroed in on Lincoln Blvd. 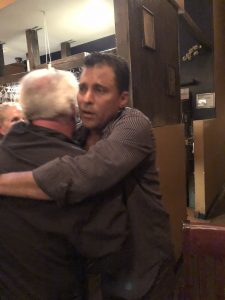 Property records show the new landlord is a man named Benjamin Dehry. I was vaguely familiar with the name from my years at the Jewish Journal, either seeing it in the society page or meeting the guy at an event or two. He is French-Israeli, a graduate of Hebrew University in Jerusalem. He made his money in sportswear, then invested in start ups and real estate.   He has served on the Board of Directors of Spark Networks—owners of JDate.

In his Monopoly board-like march through Venice, Dehry is represented by Drew Glickman. Glickman has the reputation of keeping close tabs on expiring leases then swooping in with offers from well-healed buyers that current owners find hard to refuse.

Ten years ago, the 8,292 square foot property at 1700-1702 Lincoln Blvd. sold for $2 million. In 2015, Dehry paid $4.8 million, or $578 per square foot. That’s a 300 percent return in 10 years—and it’s not like in the past decade they lined Lincoln Blvd. with sycamore trees and replaced the bumper-to-bumper traffic with eBikes and a monorail. “The Linc” still looks like a street-level freeway, just with double the rent.

“Who can afford that?” I asked Paez. The new renter would have to pay $5 per square foot, or double what Centanni pays.

“From what I understand he already has a tenant,” he said. “A vegan restaurant.”

We talked a bit more. I recalled my favorite Centanni memory. One night a couple of years ago we saw Mel Brooks eating with his son Max and Max’s wife and son a few tables away.

Naomi turned to me. “I’m going to meet Mel Brooks.”

She walked over, knelt beside Brooks, and explained that she’s a rabbi and over the years his work has meant so much to her.

“You’re a rabbi?” Brooks said, not skipping a beat. “And you don’t even smell like garlic!”

Paez and I talked about how the neighborhood has changed. About the Centanni in Burbank. About how hard Bourdain’ death hit us, how we didn’t see that one coming.

I looked up at the TV screen, which flashed from some Italian movie poster to a screen shot of an old Italian proverb.

“Once the game is over,” it read, “the king and the pawn go in the same box.”

Just then I realized what song was playing over the restaurant’s sound system.  It was Ira and George Gershwin’s “They Can’t Take That Away From Me.”