Hi Folks.  This is my first post on Foodaism since leaving the Jewish Journal.  It took a while to get the stand-alone site up and running.  Hope you’ll sign up for the newsletter so we can keep in touch.

I’ve had two food fantasies in my life.  Today I met the man who fulfilled them both. 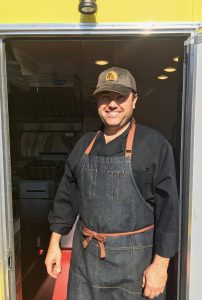 One fantasy has always been to own a small restaurant at the north end of Jaffo, perched on a promenade just above the Mediterranean Sea.  I’ve sat for hours in those cafes where Tel Aviv bleeds into the ancient port town.  In summer I’d order watermelon and feta, and in winter a bean soup and a beer.   And I’d think, how terrible could it be to spend each day here, cooking for the Jews, for the Arabs, for the Christian pilgrims and the windsurfers and the hipsters and tourists?

Nir Dagan did that.  For several years he ran Casa Nova, a cafe overlooking the sea  exactly where mine was supposed to be.

Fantasy number two: I’ve always wanted to open a small place serving food I love to eat, just a block or two from our home in Venice.  I’d wake up, have a coffee, go to work and cook for the neighbors, the tourists, the artists and Snapchatters, not to mention friends and family.

It turns out Nir Dagan did that too.

Just today I walked past a small yellow food truck parked a short walk from our home. I’d passed it before over the past month and glanced at the menu. It read “Sloppy Joe. Cuban Sandwich…” and I kept going.

Today I slowed down.

A man came out from the truck.  Stocky, young, with a wide friendly face.

“You have any questions?”

Yes, he said, it’s exactly like the Iraqi sandwich with hard-boiled egg, fried eggplant and tahini.  Except the eggplant chunks are caramelized, the egg is perfectly runny, and along with the tahini, there is a green chimmichuri sauce.  Nine bucks.  I devoured it.  You’ve seen on “What Phil’s Having” when Phil Rosenthal tastes something incredible and his eyes go wide like he saw a ghost?   This was a four-ghost sandwich. 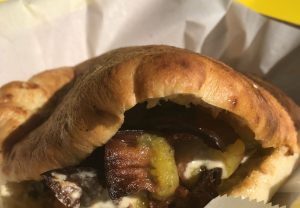 Nir told me he was born and raised in Israel, just north of Tel Aviv. He went to the Florida Culinary Academy, lived and travelled in South America for seven years, then opened his restaurant where mine was supposed to be in Jaffo.

After a falling out with his partners, he remembered two things. His fantasy was to own a food truck, which are illegal in Israel.  And when he graduated FCI, to celebrate he took himself out to eat at Charlie Trotter’s.  After one of the best meals of his life, Nir was invited by Chef Trotter  to tour the kitchen.

And Nir told me the chef offered this advice: “Before I cook I always ask myself this question ‘What do I want to eat now?'”  That stayed with Nir.

“That’s what I do,” Nir said. “I won’t sell anything I wouldn’t want to eat myself.”

The “Jubano Sandwich” is turkey, chicken, Swiss cheese and a horseradish sauce, pressed between a roll like a Cubano, but with no ham.  The “Sloppy Joo” uses chopped corned beef.  The “Loaded Corn Pancakes” are Nir’s version of Venezuelan cachapas.  The menu is a roadmap of where Nir has been in his life and what he has loved to eat there, filtered through a chef’s sensibility to push, improve, transform.  Hence, chimichurri in the sabich.

It’s parked in front of the Love Shack on Lincoln Blvd. The owner of the Love Shack, also an Israeli, invites Food Travelers to use his outdoor furniture as a dining patio.  It’s one block north of Venice Blvd., just across the street from the One Taste orgasmic meditation center. You think I’m joking, but this is Venice.

Nir will be open for breakfast soon, serving shakshuka.  Just like I would have.

“I’m making hummus,” Nir announced.  He pointed to a bowl of pureed garbanzo beans on the small truck counter.  “It should be ready tomorrow.”

I didn’t tell him in my fantasy restaurant there would be hummus each day, but with different toppings.

Nir continued. “Every day I’ll make something new for it,”  he said. “You know, to put on top.”

I’m being honest: I couldn’t be happier that Nir has taken on my dream cafe.  I suppose there’s room for another if I ever decide to take that immeasurable step from fantasy to reality.  But it’s late in the day.  And Nir’s hummus is almost ready.