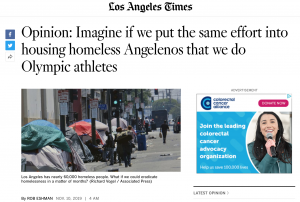 The op-ed presented Jim Murez’s idea for housing thousands of homeless qucikly in temporary shelters on vacant land near LAX.  I wondered  why, if we will be able to house hundreds of thousands of Olympic athletes (and their horses!), support staff and visitors overnight in the summer of 2028, we can’t muster the same sense of urgency for the men, women and children currently sleeping on our streets.

So here’s an idea: What if we treated homeless Angelenos with the same urgency and humanity that we will treat the visiting rowers and gymnasts? What if we eradicated homelessness not in eight years, or three years, but in a matter of months?

The plan is to use pop-up tent shelters that many other cities (including Santa Monica) use to house hundreds of homeless quickly.

The actual shelters would consist of reinforced tent structures of the kind cities use when, say, Olympic athletes come to town. They are quick to set up and take down, highly configurable, and — surprise — already in use as emergency homeless housing in many places.

The Samoshel shelter on just off the 10 Freeway at Lincoln Boulevard in Santa Monica, for example, provides 70 homeless men and women with separate living quarters and a broad range of health services. The Leeward Coast Homeless Shelter, a tent shelter opened in 2007 in Waianae, Hawaii, was built in five months. Tent structures in San Diego went up in a matter of weeks, taking 700 souls off the sidewalks.

Murez envisions an array of such shelters on the land near LAX, laid out in a thoughtful, environmentally sound way. Families would be in one area, those needing addiction or mental health services in another. Garden areas for food production could serve both health and therapeutic needs. Some tents would serve as social service centers, security stations, dining and hygiene areas. LAX and the Inglewood stadium complex, two of the largest employers of entry-level labor in the region, would be minutes away.

The first comment I got was my idea would create, “a refugee camp near the airport.”

Okay, here’s the thing that made me realize.  We no longer have a homeless problem, we have a refugee problem.

Mostly, they are refugees from a society that refuses to treat their suffering as an emergency. The average international refugee has been homeless for five years. The average person on our streets is pushing two years, on and off.

So, yes, a refugee problem needs a refugee solution.  Mass shelter, laid out in a smart, safe way, surrounded by support services.  So far, no one has come up with a better idea.  Because right now, we have tent encampments all over the sidewalks, parks, alleys and beaches, and they are not going away for years. Years.  We already have a refugee problem, we just diffuse it, ignore it, or continually plan ways to gradually nip at it.  And none of that is working.

I’d be very interested in your thoughts and feedback below.

The link to my piece is here.

« Yom Kippur Break Fast: Harissa for 300
My Response to the LA Times »