One of the best meals I’ve ever had in LA started with a two hour walk with Pascal Baudar.

I signed up for one of Pascal’s regular classes on foraging, and met him and a small group at a trailhead in Alta Dena.

This was three years ago.  The mountains were brown from drought.  Pascal began by explaining that much of what we would ordinarily forage would be scarce. But, he said, that was one of the lessons of foraging: you gathered what nature made available, and you learned to make do with what you gathered.

We headed down a ridge line to the bottom of a small canyon.  Every so often Pascal would stop and point to a  plant or shrub.  Artemesia. Bay. Black sage. Each one had a a flavor, a use.  Until then, my local plant identification skills began and ended with, “Wait, is that poison oak?” 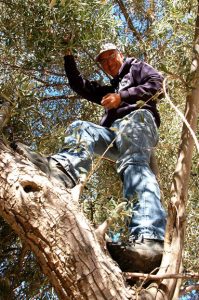 Oak trees lined a mostly dry creek bed.  Where moisture remained from some long ago rains there were clusters of small plants. Some were native, some were interlopers that had taken root in this ecosystem.  He tugged at some chickweed and passed it around for us to taste.  It was pleasant, like young pea shoots. Then oxalis had a tart sorrel flavor.  Mugwort, an interloper, could be used for adding bitterness to beer.  Mallow, also non-native, is an excellent thickener for stews. Purslane, with the texture of a succulent, was crunchy and delicate.

We nibbled our way through wild fennel stalks and wild mustard seeds, which flamed out our nostrils. We stopped again for lessons on leaching acorns, on collecting a sap so sweet it could be used as a sugar, on making teas from all the sages.

I had walked trails like this one hundreds of time all over the Santa Monica and San Gabriel Mountains.  I had no idea, until that morning, what I was seeing.

Later on we went back to Pascal’s home where chef Mia Wasilevich turned what Pascal had picked into that memorable meal.  Many of these recipes and techniques would eventually appear in Pascal’s best-selling book, The New Wildcrafted Cuisine: Exploring the Exciting Gastronomy of Local Terroir. What I remember is how the flavors blended with the scents from the hike.  What I had just smelled I was just eating.   And the flavors, like the smells, were pungent, intense.  I guess the word would be wild.  I left feeling more connected to this landscape than I ever had.   It was a meal of a few samples and small bites, and I left satisfied.

I’ve been thinking of that morning a lot as Passover nears.

On Passover, we gather around our dining tables to retell the story of the exodus of the Children of Israel from Egypt.   The narrative unfolds around a seder plate, which contains six foods symbolic of the story.  Haroset, a thick sweet mixture of fruit, nuts and wine,  stands for the mortar the Jewish slaves used to build Egyptian monuments .Maror and Chazeret are bitter greens that symbolize the harsh treatment the slaves endured. Karpas are greens that aren’t bitter, symbolizing hope and renewal. Zeroah, a roasted shank bone or chicken bone, recalls the Passover sacrifice the Jews made in the Temple. A roasted egg recalls the destruction of the Temple and the Passover sacrifice, and through matzoh, most familiar to us all, we tell the story of the hasty escape and deliverance from bondage to liberation.

If the only goal were to repeat the story, we’d just read it.  We do that on Purim with the story of Esther, and we do it each week on the Sabbath when we read a different passage from the Torah.  The point of all these Passover foods is to enable us not just to retell the story, but to relive it.

On most seder plates, the greens and bitter herbs will be something familiar from the supermarket: celery, romaine lettuce, parsley, horseradish.  This Passover, I thought,  how much more meaning could I pile on the seder plate by foraging for its ingredients? 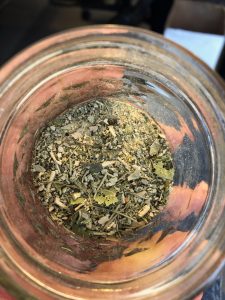 The story of Passover is the story of a journey from slavery to freedom, from civilization to wildness.  Where the Children of Israel fled, they could not farm, and they certainly couldn’t shop.   They had to gather what they could gather, and make do with what they got.

The wilderness is tough.  The sojourn begins with no end in sight.  The elation of liberation quickly turns to anxiety over what the future will bring, which is the right trail forward, how will I provide my next meal.  Trust me, I know.

Those are the questions a foraged seder plate raises– and the Passover seder is all about raising questions.

It also connects us to the natural roots of the holiday.   The greens we eat are a way to mark the beginning of spring, the renewal of life on earth.  You get that by eating a piece of parsley.  But you really get it when you taste the first shoots of dandelion that appear about now  all around us.  Or the wild watercress that grows in our rare seasonal streams. Or what about perfuming your shank bone or soup with Baudar’s native herb mix,  a blend of locally foraged black and white sage, bay, Pacific Ocean sea salt and dried garlic.  One whiff and you are deep in Temescal Canyon on a Sunday morning.

And bitterness?  How about that wild mustard seed, which has struggled to cling to the shale mountainsides and managed to survive on sips of rain. The Children of Israel saw before them a desert, a wasteland.  Which is what most of us see when we are in the wilderness.  But one lesson of Passover is to help us see salvation in the wasteland.  Baudar, wrote the journalist David Hochman, has the knowhow  “that essentially transforms a patch of weeds into a field of possibilities.”

These foods can connect us to our land, to our seasons and to our story in ways the default Passover ingredients can’t. And they taste amazing. The motto of Pascal’s company Urban Outdoor Skills is, in fact, “Reconnecting with Nature.”

A few weeks ago when the people at the Skirball Cultural Center in Los Angeles asked me if I had an idea for a Passover-related program, I immediately thought of Pascal.  Would he be interested in working with me on a program that looked at Passover through the eyes of a forager?  Pascal, who isn’t Jewish, got it immediately. (Plus how weird that his name is Pascal…)

On April 5 at 8 pm, he and I will present the program “The Foraged Seder.”  We’ll discuss foraging in LA, he’ll have samples to taste of the bounty at your doorstep, and we’ll talk about the connections between the seder and wild foods.   Skirball Chef Sean Sheridan will use what Pascal has gathered to prepare samples of Passover dishes made with wild foods.  The idea is to bring us closer to the experience of the Passover story, and to bring the holiday closer to its seasonal roots.

Passover isn’t about reading, it’s about eating.  The narrator lifts up each item on the seder plate in turn and tells its role in the story.  Then we recite a blessing over it. Then we eat it.  We chew the story and swallow it.

It was, after all on Passover when Jesus held up the matzo and wine and declared, “This is my blood. This is my body.” He was adding to the symbolism already embedded in the holiday. The Last Supper was, historically, a Last Seder.

So during Passover, greens are not just greens, an egg is not just an egg.  Flour and water are not just flour and water.  They carry all the stories,  lessons and meanings we’ve assigned to them over the centuries.    I’m excited this Passover to pile on one more.

Limited seating for “The Foraged Seder” is still available by clicking here.

I’ll have (a lot) more to say about this program as the time nears, but here’s a heads up: On April 8 at 8 p.m. I’ll be leading a discussion on “The Foraged Seder” with master forager Pascal Bauder at the Skirball Cultural Center.

Bauder spends his days exploring the seasonal, wild edible foods of Los Angeles, and Ive been spending mine thinking about the connection between food, spirituality and nature.  Our two passions come together on the seder plate, where a few seasonal foods symbolize our connections to history, God and the natural world.

During and after our discussion, you will get a chance to taste (small tastes, the Skirball people want me to remind you) the food Pascal has foraged and Passover dishes that Skirball Chef Sean Sheridan has created from those foods.  (I’m pretty excited about the prospect of a manzanita apple and elderberry wine haroset.) 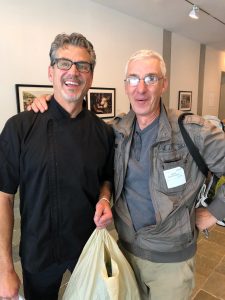 Three years ago I took part in one of Pascal’s foraging classes in the San Gabriel mountains.  As we walked he plucked the leaves of plants and trees I’d hiked past a thousand times, explained their edible uses, and handed them to us.

Amazing.   When the Skirball asked me if I would be interested in designing a Passover food program, I immediately thought of that experience.  Passover marks the deliverance of the Children of Israel from Egyptian bondage. It is a celebration of liberation,  freedom and rebirth.   It recalls a moment in our story when we escaped civilization for the wilderness, and the wilderness saved us.  I thought: What would happen if we used real wild food to tell that story? Would we connect to it in a deeper way?  Would we understand it differently?

Spoiler alert: I’m pretty sure the answer is yes.

OK, enough of a tease.  We’ll talk more later.  You can sign up here.